Challenges Women Face in Agribusiness/Agriculture in 2022

Gender equality challenges within the agricultural sector has been a pressing issue for ages. The social and economic gaps that have formed between men and women in agriculture and agribusinesses have not been addressed. Women are being disadvantaged by these challenges and it is preventing them from becoming the thriving farmers they strive to be, pulling them out of poverty, and creating a better future for them. Women face significant discrimination when it comes to land ownership, equal pay, access to credit, financial services etc.

The challenges that women face within the agricultural sector emerge due to various reasons. There are several common misconceptions about women within this sector. A good start to closing the gap significantly would be to expose and discredit the three main misconceptions: 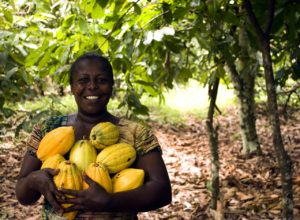 1. Women do not play significant roles in agriculture

Because women’s actions are rarely acknowledged within the agricultural sector, they are often deemed to play an insignificant role. The work women do as smallholder farmers are often considered to be part of their “domestic chores” and their contributions are seen as insignificant. They seldom receive recognition for their inputs. This then ripples into other challenges women have to face.

2. Women are not a profitable consumer market

This is thankfully starting to change as companies operating within different stages of the value chain have recently started taking part in gender-inclusive approaches to engage with customers, which includes female farmers. Female farmers who have for example previously struggled to get input and resources from big roleplayers now benefit from these programs.

3. Men do not benefit from gender-based programmes

There is a certain bias surrounding gender-related programs within the agricultural sector. Many believe that these programs only target and benefit women. This is not the case, as these programs aim to close the gap between men and women resulting in benefits for both genders. A more inclusive value chain helps to expand opportunities for both genders and encourages cooperation to a greater extent. 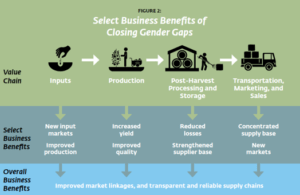 The figure above indicates several benefits businesses could gain from focusing on closing the current gender gap within the sector and uplifting women. By investing in women in all the stages of the value chain, it contributes to addressing global challenges such as food security and societal instability.

Some other key factors holding women back from achieving their full potential within agriculture are:
1.) Unequal pay
2.) The lack of strong networks and mentors
3.) Less access to productive resources and services

Since women have less access to resources and services that are required by agricultural producers, this often results in women having to manage significantly smaller farms and receive a salary of up to 16% less than men.

Although women are still not on an equal playing field compared to men, the worldwide effort to achieve gender parity is gaining momentum. The reality is that women still face the biased opinion that farming is a man’s job, every day. In order to be able to reach a point where gender roles in agriculture are completely equal there are three key priorities that need to be addressed:

Although there is still a long way to go, women in the agricultural sector can be optimistic about the fact that steady progress is being made and that the sector is becoming more inclusive. There is a bright future awaiting our women in agriculture!

For more information on our Agribusiness programmes, send an email to international@bsn.eu.

Certificate in Entrepreneurship for Women in Agribusiness