From Farmhand to President

On 20 November, our Dean Marcel van der Ham visited the Royal Orphanage in Buren at the presentation of the beautifully designed book “Van Boerenknecht tot President “(translated: “From Farmhand to President”). 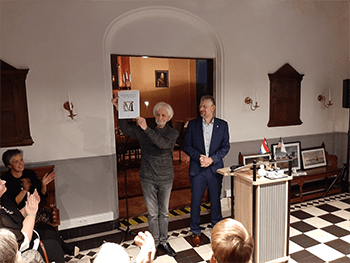 The book ‘Van Boerenknecht tot President’ was partly developed through the contribution of Business School Nederland. Jan de Boer, the mayor of Buren, wrote the book in collaboration with amateur historian Martin Ijzerman, to whom he handed out the first copy.

The book is about Martin van Buren, a man from a family that originally came from Buren and made it from farmhand to the eighth president of the United States (1837 – 1841) within 6 generations. In the 1840’s, he lived in Old Kinderhook, a Dutch-language enclave in America. The statement OK also seems to have come from him, as he preferred to sign as Martin Old Kinderhoek van Buren, in short Martin OK van Buren, or only with OK. OK thus stood for approval by the president.

In other words, a fantastic story of daring to dream big in Buren. The same Buren is a fertile breeding ground for big dreams for our MBA students.

For more information on our Action Learning MBA and Management Programmes, send an email to international@bsn.eu.