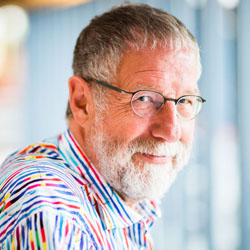 Paul Turken studied Business Administration in Delft. In the 70s he worked as a trade union leader, a scientific assistant at the University of Tilburg and a municipal councillor in Enschede. Behind his name is a considerable track record in the field of marketing and brand policy.

Paul, started by setting up his management consultancy firm WPM, a consultancy company that grew into an organisation with twenty consultants and significant clients such as Hoogovens and the Social Services Haarlem during the 1980s. He later joined BBDO, a communications and marketing agency (at that time the fifth largest agency in the world) and climbed from Managing Director Netherlands to the Board of Directors and head of the consultant group.

In 1999, he changed course to a publisher of Dutch books and took part in the advisory boards of four companies, including Aeternus and Osudio. In 2003, Paul Turken was one of the founders of the “Value Positioning Counsel” agency concept. He currently holds various supervisory board positions and advises on brand policy and (boardroom) counselling.

Since 2011, Paul has been involved as a business analyst in the TV programme “The Court” and is known for his sharp analyses of society and business. Episodes from “The Court” in which he can be seen include: “What does firework cost?” (from 5:25), “What is my blood worth?” (from 8:30) also, “What does weed cost?” (from 18:00). Paul can also be seen in an episode of “Always Young” (RTL4), in which he explains the value of Action Learning for both you and your organisation.

Paul has been associated with our business school as an associate professor since the founding of Business School Netherlands in 1988 and tutors Strategic Marketing Management. He is also an independent senior consultant and acts as a guest speaker at Nyenrode and Erasmus University.